Leuzea carthamoides (also called Rhaponticum carthamoides) is a rare endemic plant belonging to the Composite family. It is a big herbal perennial, reaching 130 cm in height. Leuzea grows on the mountain slopes in a limited area of southern Siberia (Altai, Sayani). It does not exist as a wild growing plant in other region of the world. Because of the limited distribution of Leusea in nature and because the plant grows slowly, the collection of wild-growing Leuzea in Russia is under government control and is restricted. 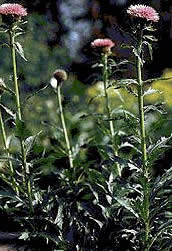 of deers known also as Marals.

At the time of mating, male marals were fighting with each other. And these fights were really exhausting and after the fight the deers needed to restore their strength. For this purpose the stags dug out and ate Leuzea roots.

Having observed this behaviour of marals, the local healers started to recommend the Leusea roots to people. They have discovered that consumption of a dried Leuzea root by people also helped males to recover them from fatigue and increased their sexual strength. The plant had been thereafter named Maral root which is now the official name of Leuzea.

Scientific studies of Leuzea's effect on human had began in Russia in 1940's, during World War II, when the country needed natural supplements to restore the strength and faster recovery of wounded soldiers.

We are manufacturing freeze-dried Leuzea extract in the form of a water-soluble dried powder. It contains minimum 1,5% of Ecdysterone which is quite a large quantity.

Daily amount: 0,5 g of the powder mixed with 200ml of warm water twice a day or less, according to your body reaction.