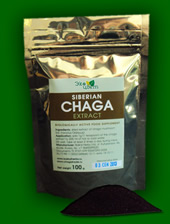 He could not imagine any greater joy than to go away into the woods for months on end, to break off this chaga, crumble it, boil it up on a campfire, drink it and feel well like an animal. To walk through the forest for months, to know no other care than to get better! Just as a dog goes to search for some mysterious grass that will save him.

From " The Cancer Ward"
By Alexander Solzenicyn

Chaga - the priceless gold of russia. 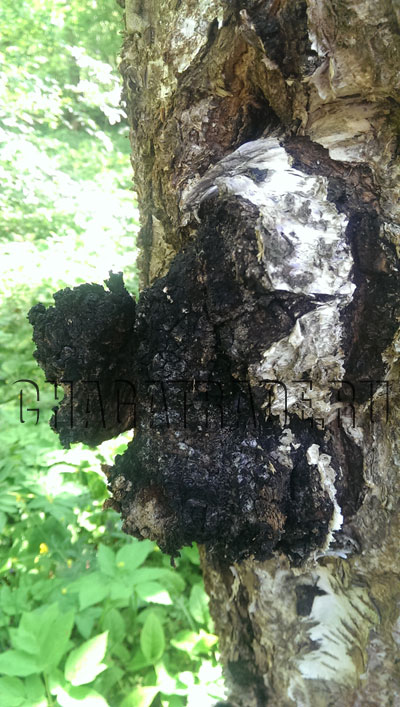 The endless birch groves, small birch groves on the banks of the numerous rivers and streams, delicate white and green spaces of ligature of birches... No country in the world has such an abundance of birch trees. And chaga fungus that grows on birch trunks appears to be one of the most enigmatic health supporting miracles of Russian nature. Due to unique properties of the wild chaga it is gaining popularity in many countries and is especially sought after by Chinese, Japanese, Korean and American people. Chaga mushroom has very distinctive features and looks like a black cracked mass in appearance. Unlike any other mushroom chaga is not actually growing on the bark of a tree but it is developing from the inside of a trunk outwards. It is very easy to distinguish chaga from any other tree fungus. 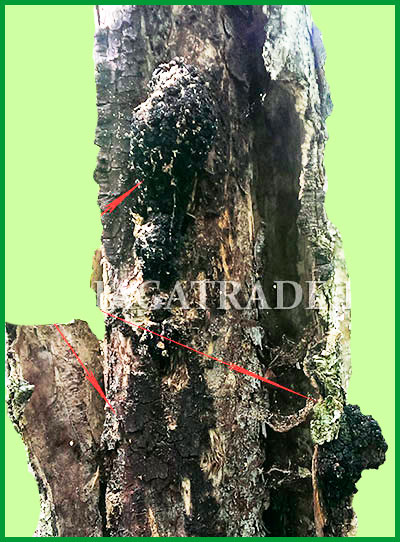 In Russia chaga is known also under the names "black birch mushroom" or "birch lip" or "shulta". Its present name "Chaga" had probably originated from the Old Slavonic word "Gaga" which means "a lip". Siberians call chaga a "shulta".

In Russia, birch tree has always been considered as a symbol of Russia and was believed to be one of the most curative trees. In local folk medicine every part of birch tree ( juice, leaves, buds, wood, bark, chaga mushroom) is used for health-supporting purposes and health-related applications. Chaga and birch tree are strongly interlinked with each other.

Because of natural symbiose between birch tree and chaga fungus, the age of the tree plays an important role in aquisition and accumulation of health-supportive properties by chaga mushroom. Chaga mushroom draws its nutrients out of a living birch tree rather than from the ground. Thus the older is the tree the more biologically active substances have been accumulated in chaga mushroom over time.

The best hosts for chaga mushroom are Betula pendula and Betula pubescens. Sometimes chaga mushroom can destroy birch tree on which it grows. However it happens mostly to the very old trees which become exhausted by chaga mushroom, especially if there are several chaga mushrooms on one trunk. The above picture illustrates exactly this case.

HEALTH supporting CHAGA SHOULD BE WILDGROWN.

Any attempt to cultivate chaga artificially will never reproduce the health supportive properties of wild chaga mushroom. This is because artificial chaga muchroom cannot possess any chromogenic complex which occures only in the wildgrown species.

Below pictures may help you to tell the wildcrafted chaga mushroom from cultivated chaga mushroom. Wild chaga mushroom consists of three parts: the black outermost layer called "sclerotium", the second part called "fruiting body" and the third one, which is porous and soft. Chaga mushroom conk is comprised mostly of this yellowish and useless layer, so it is worth to remember when checking the quality.

More than 80% of biologically active substances of chaga mushroom are concentrated in sclerotium and fruiting body. Artificially grown chaga doesn't have any "fruiting body" part and its sclerotium layer is extremely thin. 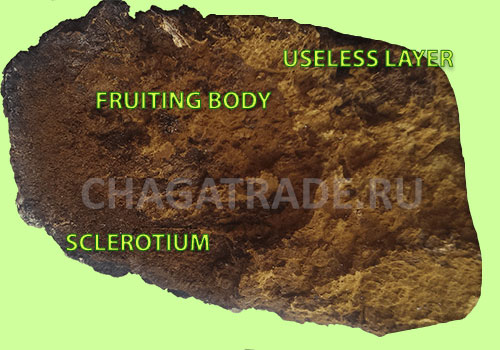 These three layers are clearly visible. The sclerotium is the oldest layer and is most beneficial for people. Whereas the light brown layer is "transitional", all juices and phytonutrients from a birch tree pass through this layer without leaving much traces and land eventually in the fruiting body and sclerotium. Phytonutrients, trace elements, chaga acids and other biologically active compounds accumulate themselves inside these two layers within the whole life of a birch tree. Therefore an old chaga mushroom is potentially more powerful than the young chaga mushroom. 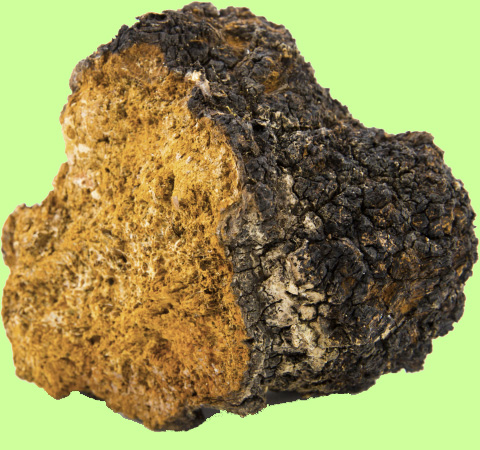 Chaga on the right picture perhaps has never been growing on a birch tree. Most probably it has grown artificially on a farm by fermentation. Its sclerotium layer is very thin and there is no fruiting body to be seen - just yellow porous stuff.

In order to achieve premium quality of our chaga extract which is famous for its extraordinary high concentration of antioxidans, we have to manually remove the "useless layer" from every single chunk of chaga before it goes to manufacturing floor. As a result, our chaga extract is almost black in color, because it's been made only from chaga layers reach in antioxidants and melanin. Below picture illustrates chaga mushroom chunk ready for production of chaga extract. 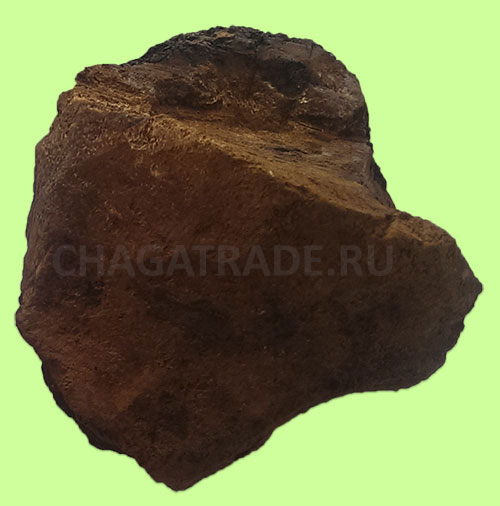 We believe in the concept, that when a body is in energy balance, with a healthy immune system
it has an amazing God-given powers!